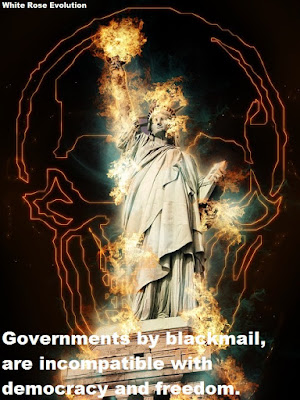 Trump's government has close contacts with Russia and is under investigation. President Donald Trump himself has a close relationship with Russia !!! He has dubious financial connections, and Trump could be and probably is, through his sex scandals, the most blackmailed President ever, while he is the most important person, the most powerful man in the world.

The suspicious connections, would give President Putin an upper hand; a masterstroke of Vladimir Putin, which actually would allow him to have America's President in his pocket. This may given Putin power over America.

But unfortunately for Putin, Trump is unpredictable, uncontrollable and Trump leads on vindictive, narcissistic megalomania, therefore this joker card can not be used. Putin must quickly throw away this unreliable Trump card!


Now Trumps government has thrown a bomb, just not a nuclear bomb, the MOAD, "Mother of All Bombs", in the province of Nangarhar, Afghanistan. Dramatic developments.   (13-04-2017)

Putin's attempt is an understandable action, seen from Russian view point, and view of the world politics and global issues. Putin may silence the opposition and free press very successfully, but he has no intention to conquer the world. For America and the West, Putin is a threat, which automatically gives as response, that Russia, America and their economic Western allies see as a threat to Russia.


This continuation of the arms race has everything to do with the lucrative, important economic and powerful arms industry. Thus, the Military -Industrial Complex remains a booming business.


Trump, since the eighties has contacts with the Mafia. Investigative journalist David Cay Johnston's book (Pulitzer Prize winner) refers among other things to it.


Trump has already for many years financial connections with Russia.


The Trump Organization, in the name of his son Donald Trump Jr., said in 2008 at a real estate conference, that "Russia is quite a disproportionate part of our possessions" and that "We're inflow a lot of money from Russia".


Donald also has debts to Russia, for example, to the Alfa Bank after he was almost bankrupt once again. The Alfa Bank, is a Russian bank, headed by oligarchs around Putin. A computer server of the bank has reportedly exceptionally frequently contacted last summer the server of the Trump Organization in New York. The FBI investigates the unusual digital contact.


Trump's attack on the US security and free press, combined with his ties with Putin and Russian oligarchs should all do us shudder.


The new trade minister, billionaire Wilbur Ross, is vice president at the Bank of Cyprus, a money-laundering institution for its 10,000 Russian customers. And the airbus of oligarch Dmitry Rybolovlev, co-owner of the bank, often landed at the airport where Trump that day was campaigning. In 2008 Dmitri Rybolovlev bought Trump's villa in Palm Beach for 95 million, double the value, during the real estate crisis!!! Trump resisted just then by all means to repay 40 million to Deutsche Bank.


Aras Agalarov, an Azerbaijani businessman, was in partnership with Trump's Miss Universe contest, brought to Moscow (2013); he provided many valuable contacts for Trump in the Russian business world. Agalarov also would have acted as an intermediary between Putin and Trump.


Trump's sexual adventures are larger than the "Clinton Cigar". Presumably this President has had more intimate involvements with women, than all Presidents of America together.


Donald Trump is a notorious womanizer and sees a beautiful woman only as a sex-object. (Women have to be beautiful in the first place, women should have "a good piece of ass", serve, educate children and keep their mouth shut!).


The CIA believes that Russia is in possession of more than one sex video in which President Donald Trump plays a leading role. Trump angrily dismissed the allegations of the former British spy Christopher Steele, as of the Russian government, which has onerous and perverse material on Trump in their hands. "Furthermore, there would be" more than one tape;  both video and audio, to "more than one date," "more than one place - in the Ritz-Carlton in Moscow and St. Petersburg - and that material is of a sexual nature ".


The unverified dossier also claimed that the Russian authorities supported Trump certainly for five years and gave him and his team "valuable information" about his political opponents. The dossier stated plainly that the Russians had filmed Trump and monitored in order to blackmail him.


Trump, the man who boasts that he has the best memory in the world, suddenly knows nothing, while a judicial link between him and the underworld is on the track. Trump is the man, who has been involved in more than 3,500 lawsuits, that have been filed against him.


There's a man in the Oval Office who is delusional, spreads nonsense and do lifelong business with dubious characters, which makes him entirely unsuitable for a position of a President of USA. The biggest danger however, presents the fact, that Trump is, or can be blackmailed. This can lead to enormous consequences for America and the world.


It is really incomprehensible that such a person is the most powerful man in the world. America, the only real superpower in the world has now a President, who is extremely dangerous and life threatening for our Planet Earth.


A quote from Donald Trump about Hillary Clinton;  " So they probably now have a blackmail file over someone who wants to be the president of the United States. This fact alone disqualifies her from the presidency".


If everything is fake news, let Trump's government give openness about all the doubtful matters, so that President Trump possible can be purified of any wrongdoing. Now we have to deal with smoking bombs, denial, ignore and ignorance.


For our unique Earth, society, our future generations would be the best, if President Putin would quickly throw the Trumpcard, with the name Donald Trump, openly on the table. Because this joker brings only misfortune and disaster to others. It would be a blessing to the world, if President Trump was dismissed, rather today, than tomorrow!