TO ALL NEW ARRIVALS, WE LOVE YOU. 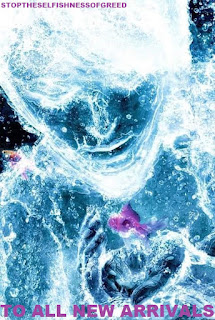 
In our world, 2 million children are working in the sex trade this moment. 1.1 Billion people in the world, earn less than a dollar a day.

If theres a God, be aware, I'm a man newly made. My son lies here, and only of him, am I afraid. As I gaze into that face, I perceive that which is true. I created him, and we created you... in his image. And I never knew love like this.

Washington, D.C. - In 2015, the United States spent more on its war machine than the next six countries combined, with a total of $ 596 billion spent on military expenditures.

The charity Said that, in 2010, the 388 richest people owned the same wealth as the poorest 50%. This dropped to 80 in 2014 before falling again in 2015. https://www.theguardian.com/business/2016/jan/18/richest-62-billionaires-wealthy-half-world-population-combined?CMP=share_btn_fb

Weapons are a big important economic industry, and is a major cause for orchestra  wars. War is an economic gain and that comes at the cost of countless innocent victims, hundreds of thousands of deaths and millions of refugees. "That's collateral damage", they say,  but in reality gives the Weapon industry nothing about that. It comes to earnings and satisfying shareholders.

An American friend and a good writer has written a article about it  in WAKE UP WORLD. Ethan Indigo Smith. "The Business of War is the Cause of War". http://wakeup-world.com/2016/05/08/the-business-of-war-is-the-cause-of-war/

An example is given only to the Weapon industry and  not written here, on the oil, pharmaceutical-, food industry, the monetary system, banking, financial or manipulated media and education.

Who will benefit? Precisely those people who are called by Oxfam and the multi-nationals, pension funds, banks, insurance companies, some Royalties, and all the rest of  the people how are getting by misery rich. Unscrupulous, Megalomaniac, Narcissistic, Selfish, power voluptuary's and chosen by God himself. (they think)

(Milton Friedman, founder of market capitalism. Less government rights, less regulation, a more robust free market economy, British and Americanism with a foreign policy that had as his unofficial motto, "POWER IS RIGHT." Where greed and deregulation go hand in hand , in recent decades under the influence of neo-liberal thinking and the American writer Ayn Rand, which egoïsm presented as the highest virtue.)

In the above article made a comparison with the waste of money. In America there are more than 550.000 homeless and who would  then each have 1 million dollars.
When Rothschild shared his total incoming and divide, everyone would have $ 70.000  in the world.

FOR OUR NEW ARRIVALS, WELCOME TO OUR WORLD.

A worried and concerned Mother Mrs.T.C.Bannavong.
"For those people who refuse to open their minds and look through what main stream media, your politicians and religious leaders are telling you, do some research, open your eyes and ears.
This has become a very scary world. Sometimes fear can keep you alive, but it can also keep you ignorance.
My fear is for my children, grandchildren and future generations. Your closed mind and ignorance and fear to think for yourself is what I most fear. As long as the majority of you continue to think as you do, the Elite will be able to continue doing what they do.
Look at the big picture - what will be the world for future generations"?
"I believe it will not be a world you would like to see for them as long as these greedy, power-hungry assholes are allowed to continue their path".

IT 'S POSSIBLE, IT CAN , IT WILL,  IT SHOULD, IT WOULD , IT MOST HAPPEN.
A NON VIOLENCE MOVENMENT.
UNITE AND CONNECT, IN LIGHT, LOVE AND WISDOM.